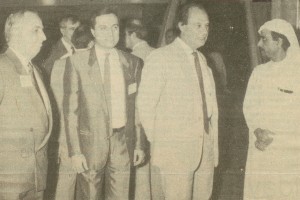 INTERMARKETS held its regional conference from October 3 to 5 in Kuwait at the Sheraton Hotel.

Reception party, that followed the conference, was held at Kuwait Sheraton on October 4 and was attended by friends and clients of the company, representatives of Intermarkets management and Intermarkets managers in UAE, Saudi Arabia, Lebanon, Jordan, Bahrain, Egypt and Europe (London).