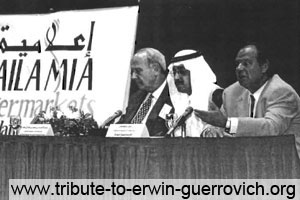 A new communications agency, Ailamia Intermarkets, has been launched in Saudi Arabia.

The company is a 51/49 joint venture between Ailamia, a Saudi company owned equally by the King Faisal Foundation, ARA Group International; Syahya, the national company for tourism, and the Saudi Hotels and Resorts Group and Intermarkets Public Relations. The company will offer clients public relations, marketing, research, promotion and direct marketing.

Ailamia Intermarkets is an exclusive affiliate of Burson-Marsteller, who took an active role in establishing the joint venture. The Chief Operating Officer is Mike Verligans (38), a former UK Government Information Officer with added experience in banking and the PR Consultancy business.