Tylda Ghosn: Getting ahead and staying there

Experts have long declared that artistic people make bad managers. The same has often been said about women. Tylda Ghosn has proven both these proclamations wrong. One of still very exclusive group of female agency heads, she is also undoubtedly the most creative.

That is actually the first thing that strikes you on meeting her. It was no surprise then to learn that her first ambition was to design jewellery. However, with no such school available in Lebanon, she decided to pursue other prospects at ALBA (Lebanese Academy of Arts). As luck would have it, she went the very day of the advertising entrance exam! Needless to say, not only did she pass the exam, but also graduated with flying colours in 1984.

After graduation she resolved to take a month’s break; she managed one week. Incapable of staying without work, she applied to H&C Leo Burnett and embarked on a fruitful seven year collaboration. Recalling those days, Ghosn remarked, “it was an intensely active time on the Lebanese ad scene, the golden ad era; there were so many agencies, now major players, which were just starting to Brow.”

H&C was probably the most prominent among them and Tylda Ghosn made her mark. Hers was the talent behind ads like Dewar’s “Stuck On You” elaborating on Farid Chehab’s hit theme: “When it’s love, it never varies.” And she followed with the publicly acclaimed “I witnessed…” ad for Ancestor whisky.

Unfortunately, even the most successful partnerships come to an end, and so, for reasons she tactfully chose not to disclose, Ghosn left H&C in 1991. She got married immediately afterwards, giving her the opportunity to take a break and dedicate herself to family life. But true to form again she could not bear staying without work for long.

“Some women are made to raise children, and some to work,” she explains. “Offers started flooding from everywhere. I was really flattered! I mean, you stay with a company for so long, you’re creative behind closed doors!”

Among the offers, one was challenging enough that she could definitely not turn it down: Intermarkets approached her to set up a partnership. “All my friends warned me about getting into a partnership” she confessed, “you know, it’s like a marriage and you are somehow stuck with it!”

The offer involved a 50-50 partnership with the new company securing great independence and creative control. For Ghosn, the opportunity was too good to forego. And so, Gemini was launched in June 1992. While the name may seem unusual for an advertising firm, the way it was actually chosen is even more peculiar. Ghosn explains: “I had been making lists and lists of possible names for a long time. In the end, I had so many I could have written a book! But on the very day of registration I still had not found one that completely suited me. In despair I asked my partner, Erwin Guerrovich, what the horoscope was for that day. Alas, Gemini it was.” 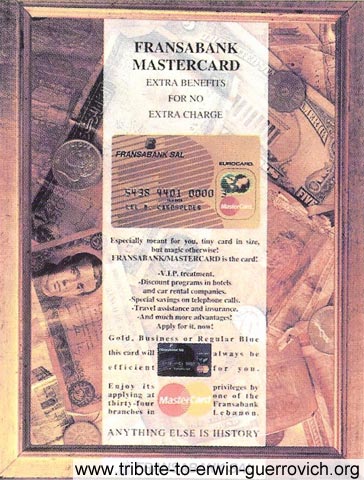 Specially made for Fransabank

On the subject of Guerrovich, her partner, Ghosn has nothing but praise: “Erwin is a great partner; he doesn’t interfere; he dosen’t question our decisions; he’s always there when you need him, just like a friend.”

Of course, Gemini must obviously be doing something right to keep the relations running smoothly. And, as Ghosn admitted, this doesn’t exclude competing with Intermarkets: “Oh yes, we definitely do compete with them,” she affirmed. “Some clients fear the big companies. We at Gemini give the required time for every client.”

On the subject of competition in Lebanon. Ghosn is equally frank: “Gravissimo! They are fighting with every kind of weapon. The media scene is a complete carnival and everyone is copying everyone else. And the agency – would you call one man working with his secretary an agency? I mean those people have no overhead costs. How much do you think they need to operate? They are just media booking boutiques, and they are cutting everyone’s profits! What can you say to a client who has been given a better price from that kind of agency.”

Finally, on the subject of clients, Ghosn doesn’t consider them entirely blameless either. As she reported, “The client used to be king – he’s now emperor! Some give you a brief one day and ask for something else the next; some just argue for the sake of it. Agencies are also to blame for this situtation as the client doesn’t understand what various things cost, especially new technology, and by cutting prices to snatch each others’ clients we are sabotaging the whole system. It’s getting absurd!” Serious again, she adds a heartfelt appeal: “The clients must act like a civilised person and we “professionals”, agents and media, must act with respect. Believe me, I’m in this business because I love it – and the day the business stops pleasing me, I will quit.”

Until that time, Ghosn is managing to survive with poise and determination. “I don’t give and take on matters of money. I try to give my clients more than they have asked for; a perfect and complete package: a concept with all its facets,” she insisted. Gemini does offer a thorough deal, from the initial creation to the marketing stages. For example, the Ksara promotional campaign was completely designed by Gemini, including the girls’ outfits! From the time Ksara entered the Wine Expo in France, Gemini only had four weeks to come up with a booklet. The result was a small black gem of a brochure and, scores of compliments from home and abroad for all the staff.

Such attention to details has meant that Ghosn spends long hours at the office: “Of course when you love what you do, you give without counting…,” she confessed.

Even though it also means spending long hours away from your baby daughter?
“Oh please don’t remind me! It’s hard enough,” she admits as she proudly shows me a picture of her family. She puts the picture back on her desk and we move on to more theoretical notions about being a woman in advertising.

“Yes, I believe women are more sensitive and more…’entier’ – when they give themselves to something, they give completely, and we do persevere!” A quality she finds essential to survival in the advertising world today. “You have to be a hard worker in this business, you really should love people and have patience, lots of patience. Women usually are quite good at dealing with people.”

Any gender-related problems with her staff?

“Oh no, an agency is a team and your mentality and enthusiasm rubs off on the staff.”
And clients?

“Not really, I think they overcame my being a woman, if that is what you are insinuating!”

We both laughed.  The interview had gone on longer than either of us had realised.

Everyone else had long since left the office. But Ghosn had time for one last reflection on the future of the business she cherishes:

“It’s sad that today in Lebanon we are neglecting our educative mission. People have come out of a long war, and the media should be helping to promote and restore our culture. I believe we have a role to play in educating the public. We should do our share to help our country move forward. With my ads, I try to sell dreams, beautify images; I try to change someone’s day a bit…, and my clients’ sales a lot! I would love to be part of what makes the Lebanese say every morning: ‘Good morning Lebanon, welcome back to real life!”